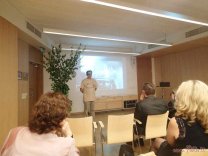 The problem of pirtis documentation

The main problem that prevents from proper understanding the process of the development of the Baltic or simply Lithuanian steam bath and its place in the in the pre-Christian lifestyle is the lack of written sources. The situation changed only after the baptism of Lithuania in 1387 and Samogitia in 1413, when the Western documantation started to appear in the Grand Duchy of Lithuania. By evaluating the few written historical sources that mention a bathhouse, it can be argued with good reason that steam bathing in pirtis was actualy wide spread in the territory of the Baltic tribes.
The very latest adoption of European Christianity in Lithuania created an exceptional opportunity to preserve pre-Christian traditions.

The traditional religious tolerance of the Grand Duchy of Lithuania, the secluded lifestyle in the villages, and many small-scale noble households contributed to the preservation of these traditions or their fusion with Christianity. The Lithuanian steam bath is one of the examples of the previous worldview.

A living pre-Christian heritage is mentioned by many authors of the 16th-18th centuries, describing the existing pagan traditions. These traditions did not disappear even in the 19th century. Oral heritage tells us about this, which mentions that Christian traditions were not always adhered to: “... there was a bathhouse. On Christmas Eve (Easter morning, Good Friday), people steamed in it. This bathhouse, together with the people, fell into the ground (the devils swallowed). "

Therefore, we consider the historical development of the Lithuanian bath culture through the rural environment or those close to it. In written sources up to the 16th century, in the censuses of yard inventory, there is no information about the architectural solutions of the Balt (Lithuanian) bathhouse.

Luckily this deficiency is backed up by archaeological finds, which, despite the fact that they do not fully convey the attitude of the people of that time, are unique. The archaeological finds of the lower town of Kernavė can be called such unique ones.

In 1986 expedition led by archaeologist A. Luhtan on the territory of the lower town of Kernavė in the cultural layer of the 14th cent. discovered the remains of a smoke steam bath. It was a single room without porch, 4.8x4.8 meters in area (inside 4.10x4.10 m) of unbarked pine logs 17-21 cm thick. Ends of the logs were let to stick out. The blockhouse is almost exactly oriented to the cardinal points. The entrance is from the south-east side. The building was without a foundation, it stood on a hill of sand. The floor is made of pine planks. A furnace made of fieldstones, 1.6x1.3m in size. Made without use of clay mortar. The gaps between stones were filled with small crushed stones.

Almost nothing was found in the bathhouse. No pottery has been found at all; only a few random animal bones. The only find is a broken wooden ladle with a handle. In front of the entrance, there was a path lined with stones (it is assumed that it led to a pond). Behind it on an area of 9 sq.m. there was a layer of ash and charcoal that appeared when the stove was being cleaned. At 5 meters in the northeast there was a well.

Inhabitants of Kernavė in the XIV century clearly loved the bath. The threshold was badly worn out. Another such layer was found under the top layer of ash and coal. The bath brooms were made exactly the same way thay are made today. The najor part of charcoal is pine and birch. The design of a steam bath has hardly changed up to these days.

The role of steambathing in ancient Lithuania

The special significance of the bath in spiritual culture is shown by the record of the leader of the Polish reformation of the second half of the 17th century. J. Lasitsky about the heavenly god Perun: “Perun, the sun, tired all day and covered with dust, leads her mother to the bathhouse in the evening so that in the morning she will rise again and shine merrily”. This recording is interesting to us because it is closely related to the mythical image of the "Solar Bath": sinking, the sun floats into the bath. This is due to the ban on swimming in the bathhouse after sunset. The fact that a bath is a place of connection between the practical and the metaphysical worlds is also confirmed by the prohibition to stay in the bath in the evening, because “spirits came to those who were delayed”.

The bathhouse played a special role in a person's daily life, in its most important moments. Material collected by one of the most famous researchers of the bathing traditions of Lithuania S. Daunys shows the special significance of a bath in a woman's life: the most suitable and safe place for childbirth; for meetings of the women's community of the village; raising girls and sharing knowledge between generations; initiation of girls into the world of adults.

A village community that unites a link (it does not matter in what connection they quarreled, but it is imperative to call a neighbor to the bathhouse and makeup before taking a steam bath). The birth and death of a person are often associated with a bath (childbirth or ablution of the deceased), the first washing of a newborn was often also carried out in a bath.

One of the stages of flax processing, which also played an important role in human life, took place in a bath.

It is necessary to emphasize one of the most archaic bath traditions, which is still alive in some baths (it is naturally practiced in the ethnographic village of Musteika in the Dzukija National Park) - a hot stone is dipped into a vessel with water to heat the water.
In the review of the historical development of the Balts (Lithuanian) bath, its influence on human life and worldview, it is necessary to highlight the significance of the bath broom.

Use of bath whisks

The historicity of the bath whisk (broom) is undeniable. This is confirmed by the finds of the XIV century made in the lower town of Kernavė. Used bath brooms were also found here. Traditions of knitting bath brooms are characteristic of all ethnic regions of Lithuania (most often they were knitted by shepherdesses when grazing cattle) and make up an integral part of the bath.
One method of knitting brooms has been fixed, which is common in all ethnic regions, and is used both for knitting bath brooms, and just brooms or brooms.

It is necessary to separately consider the spiritual meaning of steaming and a bath whisk. The ethnologist and researcher of religion G. Beresnevičius, investigating the connection between a bath whisk and a broom, emphasized that the purpose of both is purification. This apt remark is confirmed by the fact that in the north-eastern part of Lithuania a bath whisk is called a broom.
The bathhouse, as a place where the real and the dull worlds, supernatural forces and spirits collide, is a special space in which the ritual of the creation of the world takes place every time - birth, the transition from one world to another.

According to M. Eliade, in such a ritual "the event of the past is reproduced here and now."
In this repetition of the beginning of the world, rebirth takes place every time. The bath broom in this process of rebirth washes away all the "dirt" of the past and protects at the dangerous transition between the worlds from the spirits, of which there are so many around the bath.
The historical development of the Lithuanian (Baltic), its place in everyday life and spiritual life of a person, the significance and exceptional role in the ethnic culture of Lithuania can be understood from one phrase that conveys the essence of the world outlook: “You should be in a bath like in a church”. The bathhouse and the church are compared to two shrines that determine a person's life, his thinking, values.

Beliefs of steam bathers of the past

Lithuanians had a female goddesses called Laumes. Their main sphere of activity is connected with water. They were a big lovers of the bath (they are often mentioned bathing in the bath, sometimes standing near the bath and determining the fate of the newborn). There is a tradition of leaving brooms in pirtis for Laume after bathig in a steam room, so that they can steam well. It also speaks of the exceptional place of the bath whisk in the Lithuanian pirtis tradition. This custom shows a universal tradition to appease otherworldly forces that influence the world of the living.

The women who took a steam bath were also called “laumes“ (“Laumes washed in the bath”), and the women's bath was called laumes bath. In the northeastern region of Lithuania there is an abundance of Laumes stones or reservoirs associated with the bathhouse ("The bathhouse that was on the stones"; "Nearby was the bathhouse in which the laumes were shown", the source "Banja Laumes"). It is necessary to accentuate the connection between the stone and the water in the bath - Laumes become, as it were, mediators connecting them.

The recognition of tradition