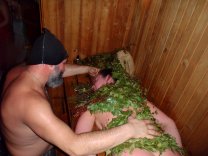 The Romans were influenced by the Greeks and built thermal baths at mineral and thermal springs. The development of aqueducts expanded the public baths into massive establishments known at thermae that could hold thousands of people. The Roman bath process started with exercise to heat up the body. Thereafter, one would enter the tepidarium which is a warm room sourcing radiant heat from the floor and walls at 35 C. Originally serving as a room for relaxing or gathering before entering the hot baths or for getting an oil massage. Following, the laconicum, is a dry circular room at 80 C, for detoxification, which was first used by the Spartans. A body scrub would follow to rid of dead skin and for a more rigorous massage. The caldarium is a hot steam room heated by a system underground used for further relaxation. A cold plunge would follow to refresh, release endorphins and close the pores. Relaxation with rest and light refreshment concluded the process.