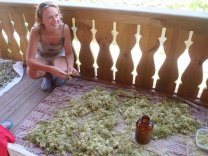 You are here: Home » Library » Rules for bathing

Rules for bathing and the adminstration of the baths

These text about hot bating has been written by prominent physician of XIX and XX cent. J. H. Kellogg. His insights remain extremely useful today. We reprint them unchanged from 1906.

The following general rules should be carefully studied and thoroughly understood by every one who expects to employ the bath. Much injury to health and most of the discredit cast upon the use of water as a remedy have arisen from a disregard of some of them.

It seems to be a prevalent error that it makes little difference how water is applied, provided the patient is only wet. Warm, hot, tepid, temperate, cool, and cold baths are used indiscriminately. So, also, the different modes of administering baths of the same temperature are disregarded in many cases. In general, each particular form of bath is especially adapted to the treatment of special conditions, and it is the best test of the proficiency of a physician, in the use of water, to observe whether he recognizes the distinctions between the various kinds of baths, and is able to adapt them to the appropriate conditions.

Giving too much treatment is likely to be the error into which the inexperienced will fall, rather than the opposite extreme. Nature cannot be forced to do more than she is capable of doing; and as nature must do the healing, if a cure is accomplished, remedies should be of a helping rather than a crowding or forcing nature. The vitality of patients may be expended uselessly by treatment; for baths excite vital resistance, as well as drugs, a. fact which many overlook. The dangers of over-treatment are not so great as some imagine, however, who take the opposite extreme, and advocate rest as the great cure-all. We have seen patients who seemed to be quite monomaniacs on the subject of “ rest cure,” who needed a good thorough stirring up with useful exercise more than any other kind of treatment.

2020-06-10
39 places left
GoToMeeting
Workshop dedicated to people, who are planning to build their own sauna or have it already, and want to get some ideas and inspirations, but good for everyone, who are interested in healthy and pleasant bathing.